Through a series of science fiction writing workshops with CERN physicists, Suzanne Treister’s Scientific Dreaming attempts to open the imagination of scientists to envisage optimistic futures based on hypothetical scientific breakthroughs

Suzanne Treister has been a pioneer in the digital and new media art fields since the 1990s, creating work about emerging technologies, developing fictional worlds and international collaborative organisations. In 2018, Treister received the Collide Award and completed a residency at CERN conducting research around the holographic universe principle. Her work in dialogue with theoretical physicists resulted in the project and art installation, The Holographic Universe Theory of Art History (THUTOAH), where she hypothesises that artists may have also been unconsciously attempting to describe the holographic nature of the universe.

Since then, her engagements and interest in fundamental physics and complex technologies have continued. Last June, Treister returned to CERN with artist Richard Grayson to engage with the CERN community to develop Scientific Dreaming. The project attempts to expand the unconscious imagination of scientists to envisage optimistic futures based on hypothetical scientific breakthroughs and their potential outcomes for this world and beyond, whilst exposing potential risks attached to related technological advances.

Artists Suzanne Treister and Richard Grayson at CERN's Main Building during their visit in June, 2022

Its background component consists of images of flowers pressed inside the book Dream Symbols of the Individuation Process: Notes of C. G. Jung’s Seminars on Wolfgang Pauli’s Dreams. The text intertwines the arts and sciences through an analysis of the subconscious mind of the CERN physicist Wolfgang Pauli. Wild flowers picked both from within the area of CERN’s Large Hadron Collider and from Swiss alpine meadows outside the CERN area are pressed inside pages of the book and photographed. 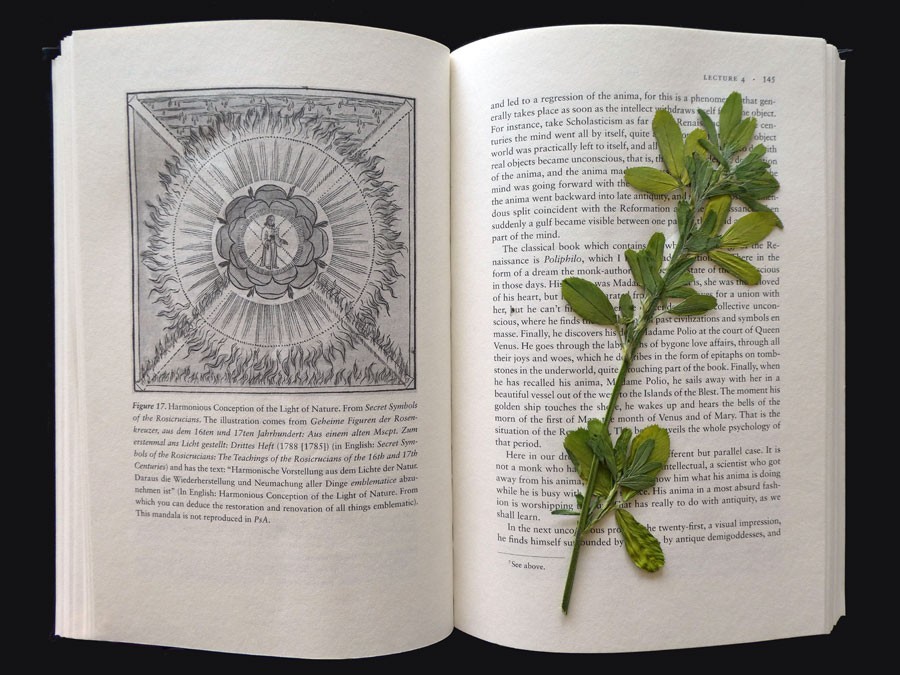 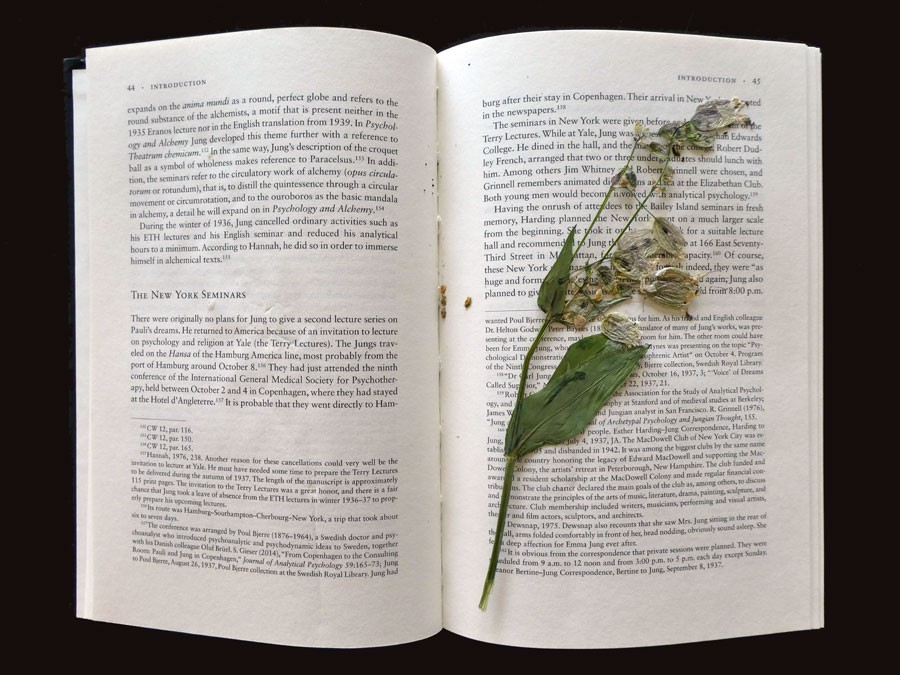 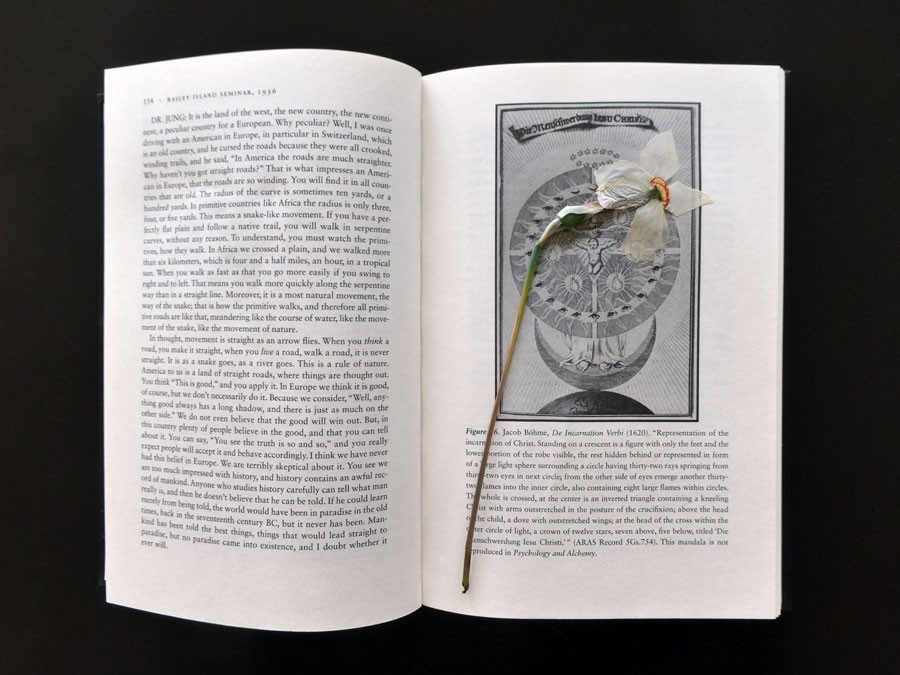 ‘My imagination has definitely expanded after Suzanne’s workshop’, commented Claire Adam-Bourdarios, a French physicist based at CERN and CNRS, after her session with Suzanne Treister. The artist facilitated a series of science fiction writing workshops with several physicists. Through different narrative exercises, the scientists created plot diagrams of fictional stories based on speculative scientific advancements, engaging critically with their impact and consequences in future scenarios. 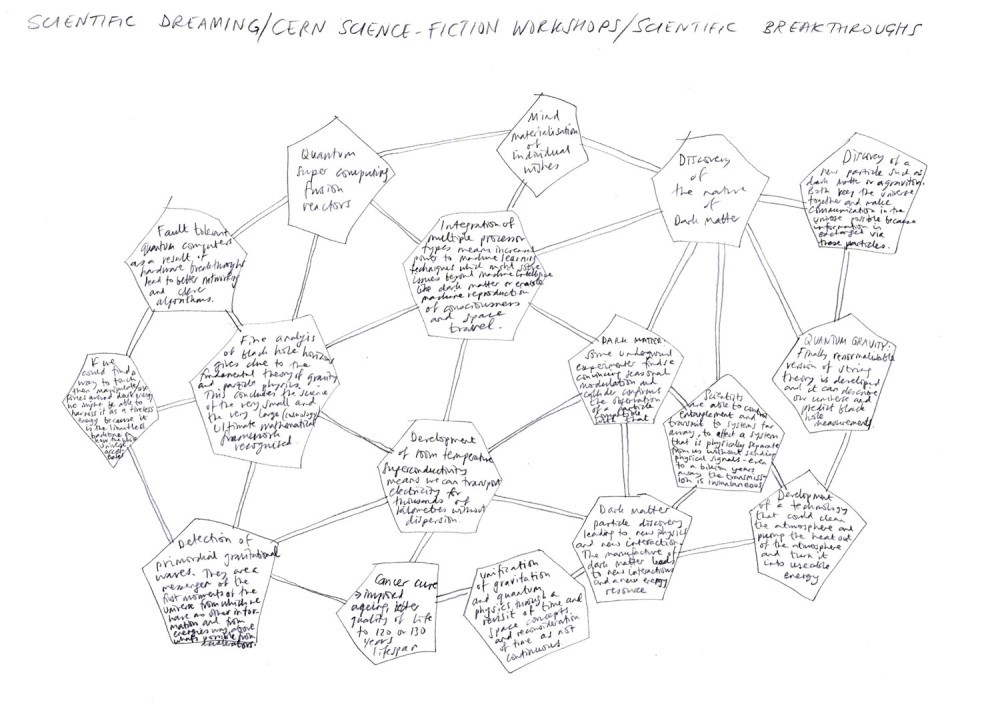 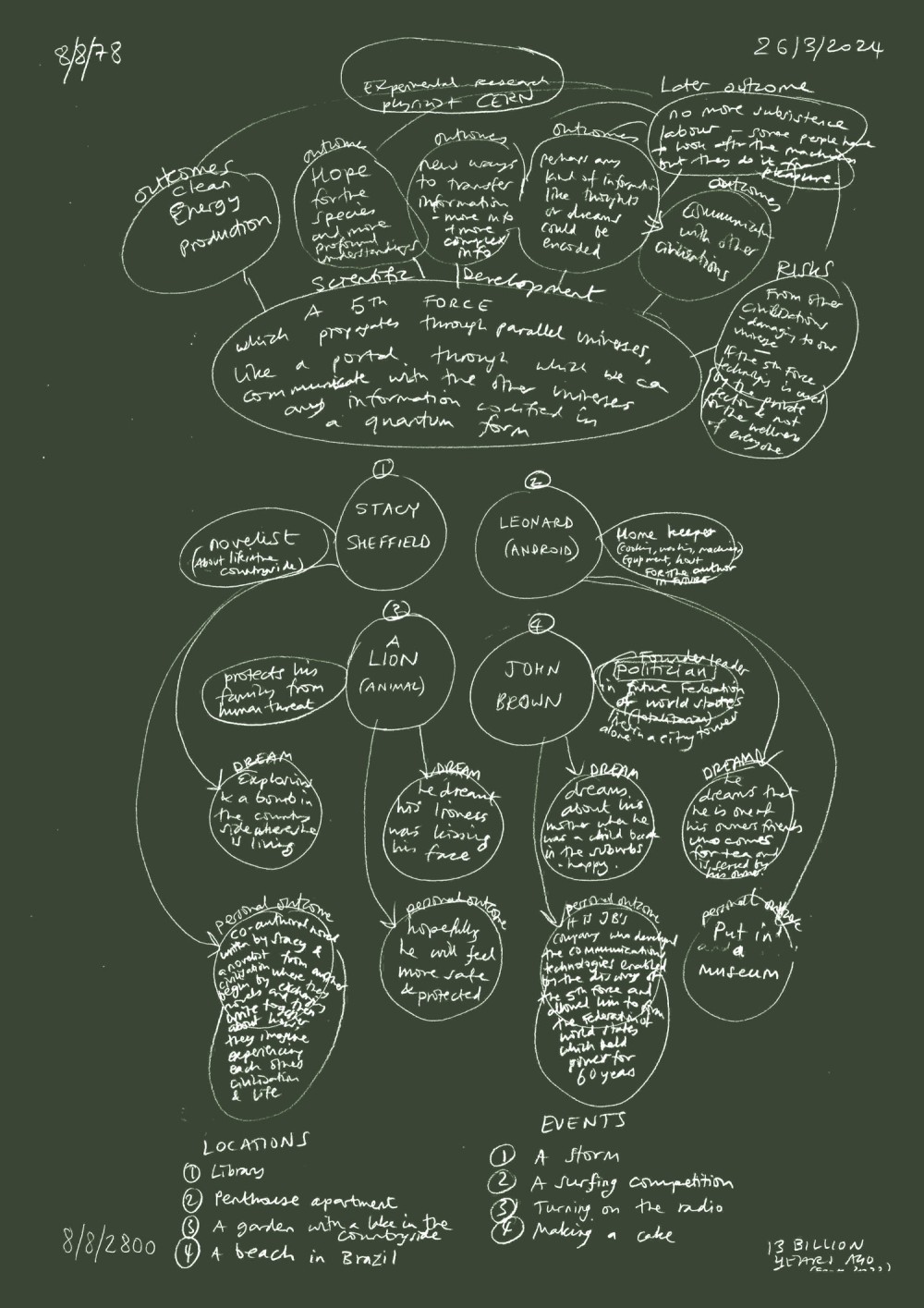 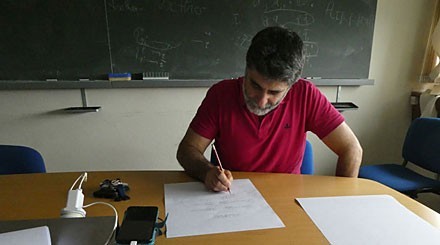 A physicist during the science fiction writing workshop with Suzanne Treister 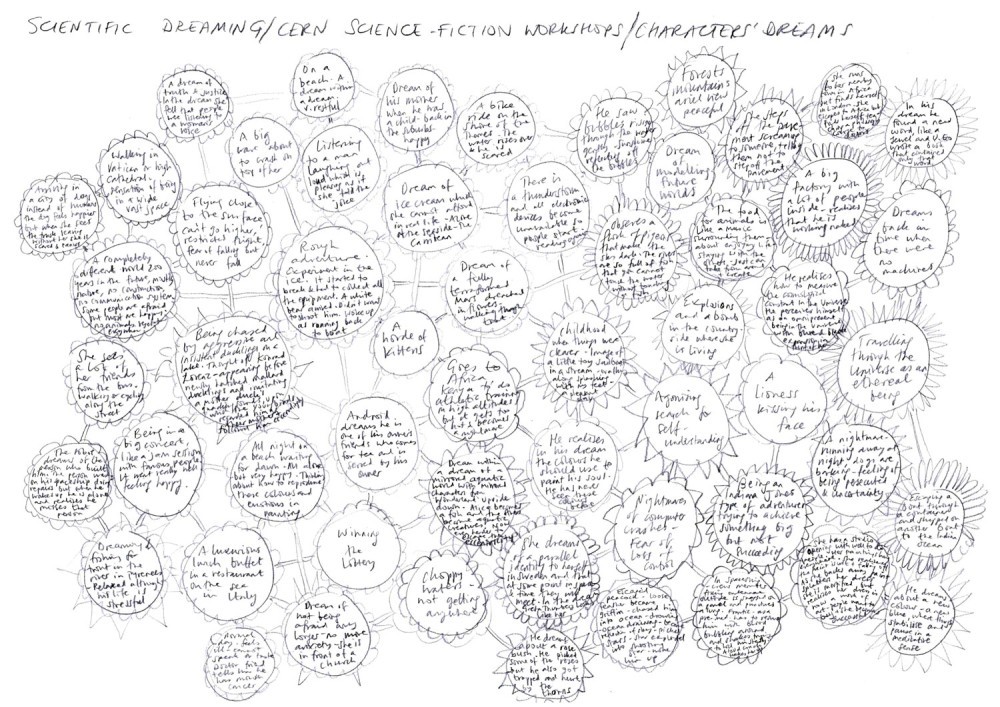 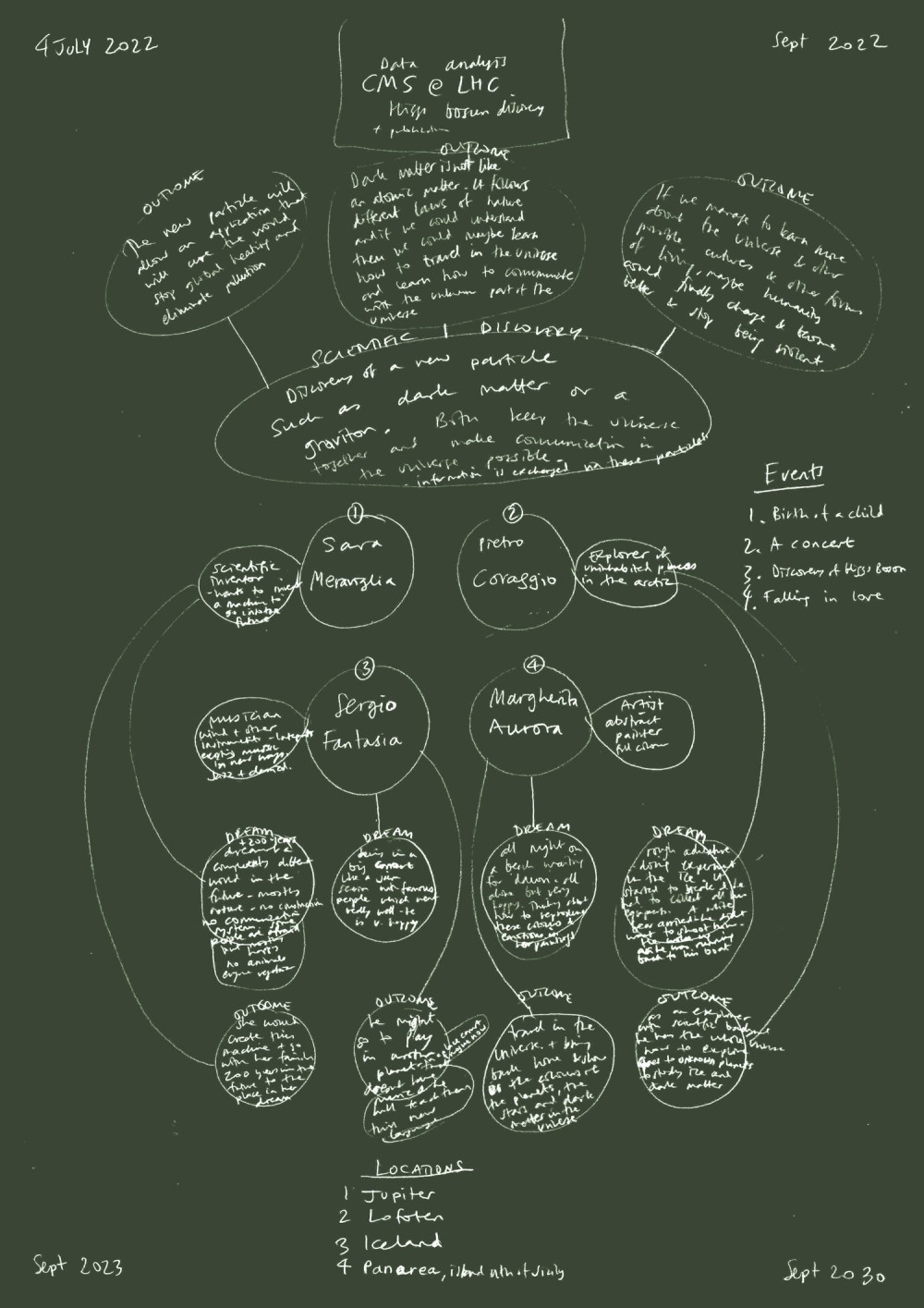 On 18 November 2022, Suzanne Treister will present drawings from Scientific Dreaming for the first time in the UK at Somerset House London. The event Dreaming Quantum Futures will see Treister in conversation with theoretical physicist and continuous collaborator Alessandra Gnecchi to explore the relationship between quantum physics, emerging quantum technologies, alternative belief systems and potential futures for earthly and interplanetary life. The conversation will be chaired by quantum computing artist Libby Heaney.

Scientific Dreaming was made during a residency at La Becque, La Tour-de-Peilz, Switzerland, supported by Arts at CERN and curated by Mónica Bello.