Gaweda & Kulbokaite: ‘We are fascinated by how science works based on collective efforts’

In November, the 2021 Collide-winning artists have been in residence at Hangar in connection with Barcelona’s scientific laboratories. We spoke to the artists about the development of their project Gusla, their encounters with the local scientific communities and the parallels between fundamental physics and Baltic folklore.

Your research bridges seemingly disparate fields, such as folklore, technology, science and magic. What can a residency award like Collide bring to your work?

The spirits of vernacular belief serve to demonstrate that the past is not really past at all and that the drowned, burned and buried - have always lived - in cyclical time and the landscape. Bodies, souls and interstitial spirits occupy liminal, polluted zones on the edge of the world: swamps, soils and wastes. We are interested in these in-between spaces and states; for example, when the laws of classical physics collapse at the edge of the quantum world. As a way of thinking, weirdness manifested in fables and observable within the interactions of fundamental physics provides us with an ecological vision of the world in which humans, non-humans and nature are completely imbricated, always unstable on the verge of becoming other.

What runs through both the fundamental interactions and the Baltic and Slavic folklore is a sense of unease, which can be applied both to supernatural entities (such as the demons of the landscape) and to natural phenomena (such as the black hole). Moreover, there is an interesting parallel between science (at least quantum laws) when observing the fundamental elements of nature: observation modifies the object being observed so that it is impossible to detach the observation process from the observed. Similarly, art emerges in a discursive process through moments of audience engagement with the work of art. It is interesting to see these parallels and incredibly stimulating to have such conversations with scientists.

How did your interest in quantum physics come about?

Our interest in particle physics derives from our ongoing reading of (eco)feminist and queer theory, specifically writers such as Luciana Parisi and Denise Ferreira da Silva, with their specific emphasis on the liberating potential that quantum physics can offer for thought and social relations. In particular, Denise Ferreira da Silva calls for quantum unlearning, a profound questioning that quantum physics demands of us: through physics, we discover that the universe does not respect our intuitive notions of subjectivity, objectivity, knowability, categorisation and even existence itself. We are also interested in how quantum physics introduced an instability of knowledge into the scientific world and how it opened up the scientific vocabulary to certain features of weirdness and even magic. We hope that engagement with quantum mechanics has the potential to break normative patterns of human behaviour and negotiate new ways of relating to the natural world to find new patterns. Our project looks for strange relationships between particles, beings and thoughts. 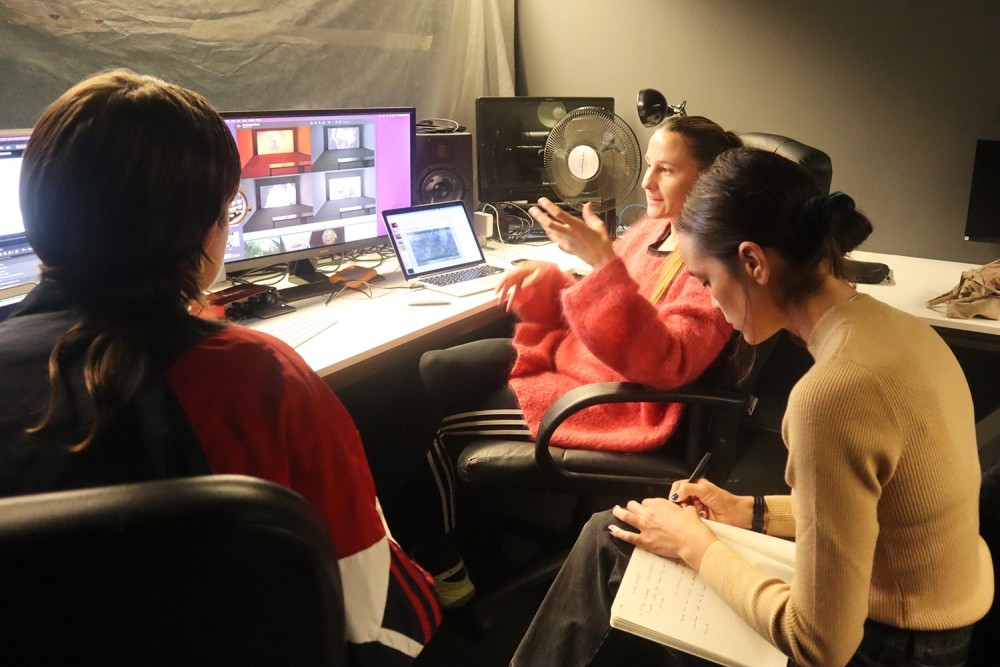 Gusła is the proposal with which you won the Collide Award. How has it developed so far?

Our project proposal Gusła is, in a sense, a continuation of our video series Mouthless, of which two parts have been completed, and the third is currently in production. The videos aim to consider a range of urgencies that we see intertwined in landscape ecology, including primitive accumulation; histories of European deforestation; ecofeminist theory; undead folkloric beings originating from Slavic and Baltic cultures connected to the soil, marsh and earth waters and the historical redefinition of the relationship of the individual and the land. In our work, strangeness permeates both content and form. An assemblage or union of two or more references, aesthetics or concepts that seemingly do not go together is intended to destabilise the certainty of the meaning of knowledge. Damp as moss, it creeps into the cracks of written texts, into the fissures of history and flourishes in the comforting darkness, intricately organic.

The word ‘gusła’ translates from Polish as ‘witchcraft’ and ‘incantation’, derived from the realm of rural folklore. It is performed at crossroads as a means of summoning lost souls, bringing forth the invisible and unseen from the environment. The project we propose, in its final form, will combine the spatio-temporal media we usually work with, such as sculpture, installation, smell and video, attempting to conjure up what is out of place and out of time, inspired both by stories taken from the Baltic and Slavic vernacular beliefs and by the processes and theories of fundamental science. Both methods of understanding the world allow us to visualise and understand the invisible. Both look at the environment on the micro and macro scale. In physics, we try to understand the universe through its fundamental particles invisible to the eye. Our ideas are slowly developing into a science fiction narrative of quantum invocations. We are starting to work on the script and storyboard for the new video work and hope that before the end of November, we will be able to capture some footage here in Barcelona. 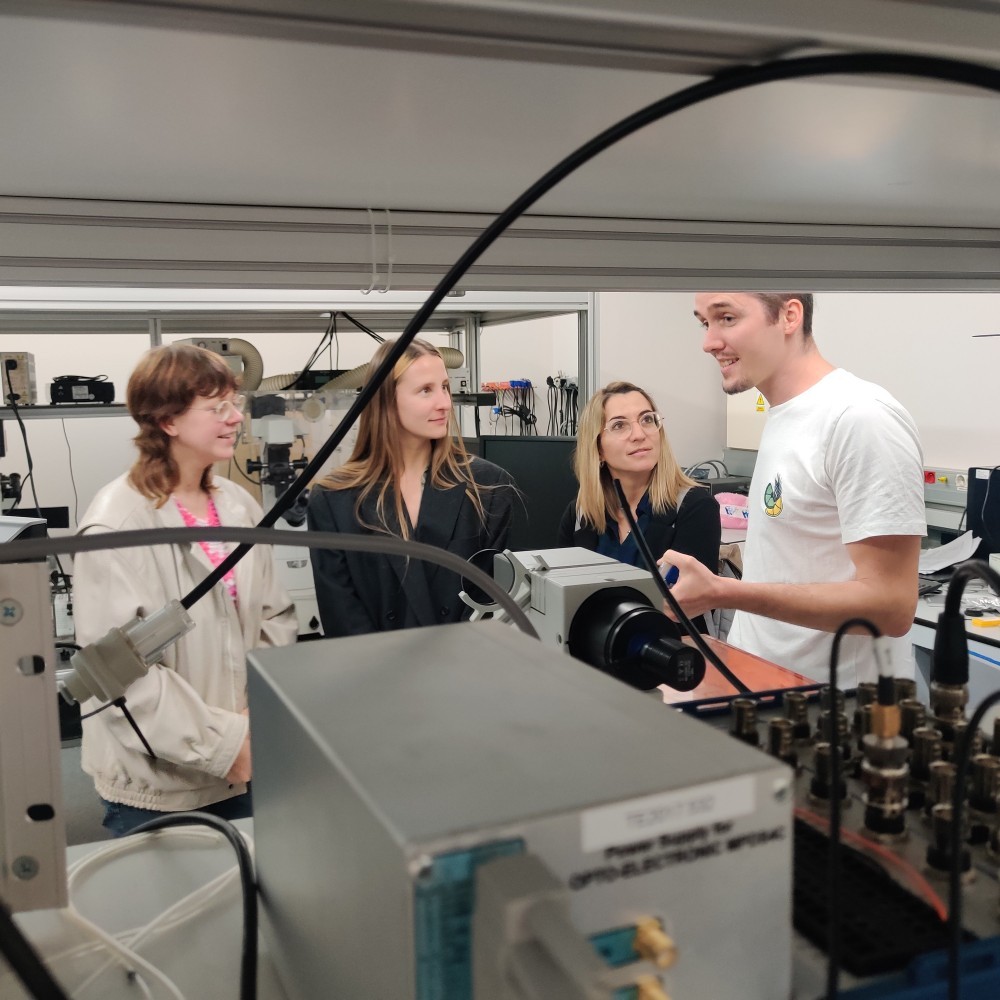 What did you encounter during your residency at CERN?

We started our residency with underground trips to the ATLAS and CMS experiments, with the good fortune of being able to visit them in March and April 2022 before the experiments closed for the next few years of research. This in itself was an incredible experience of an underground world that is rarely accessible, as in mythological tales, but also very different from the fables that usually inspire our practice. The ritual of the descent, the aesthetic dimension of the environments and the grandeur and technological complexity of the machinery used in the experiments leave one with the feeling of not having enough tools to understand them fully.

After the first week of conversations with members of the scientific community, we found it fascinating how science works on the premise of collective effort beyond the individual life. We realised that it is best to enter this world with an open mind. Our goal is to understand how weirdness enters the world of particle physics both in language (the introduction of nomenclature such as “strange quark”) and in experimental research processes. Already in our first week at CERN, we also had challenging conversations with theoretical physicists Michelangelo Mangano and John Ellis, who opened doors to theories such as Chien-Shiung Wu’s Parity Violation.

Our approach to the residency was to gather as much as possible during the month of May that could be conceptualised and concretised in the body of the production, with a view to the month in residence at the Hangar in Barcelona, in November, and in the final month at CERN, in 2023. We have been very busy during the first few weeks of our stay here in Barcelona. We have had many inspiring conversations with professionals in science and cultural production. In these encounters, we have talked about how science probes the in-between and the invisible. We feel that many of these meetings enrich our work and complicate our thinking by filtering into the project, which is what we had hoped for. We find the possibility of working outside our usual context particularly enriching, and a residency is a unique opportunity to do so. 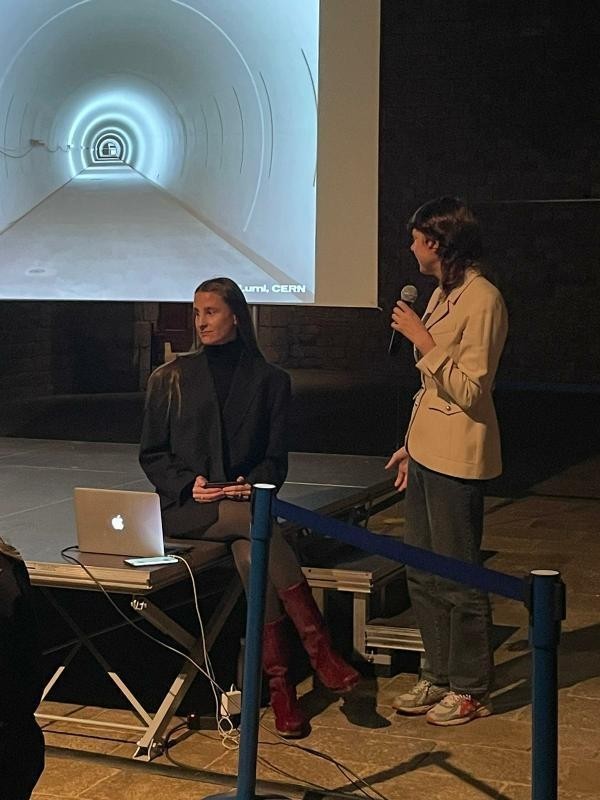 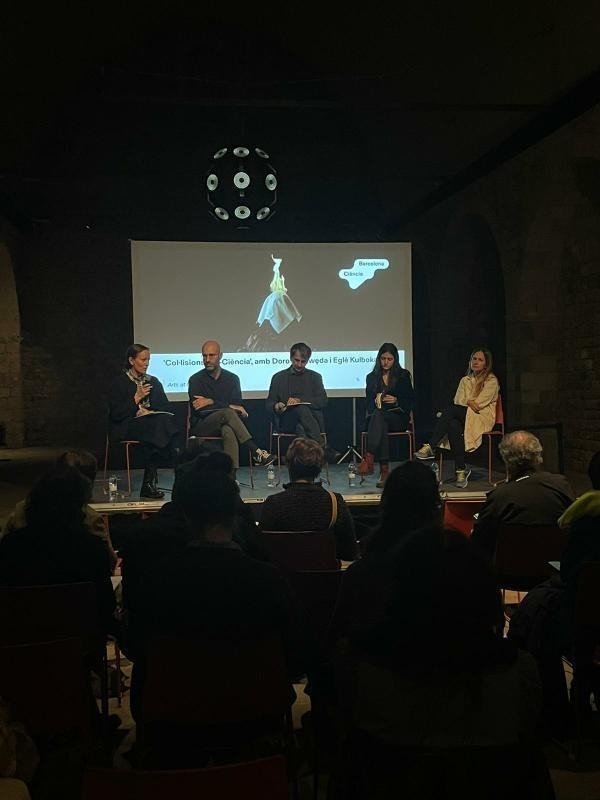 Presentation of the publication Art-science collisions. Notes from a choral dialogue in Barcelona during the celebration event of the three-year collaboration between Arts at CERN and Barcelona. 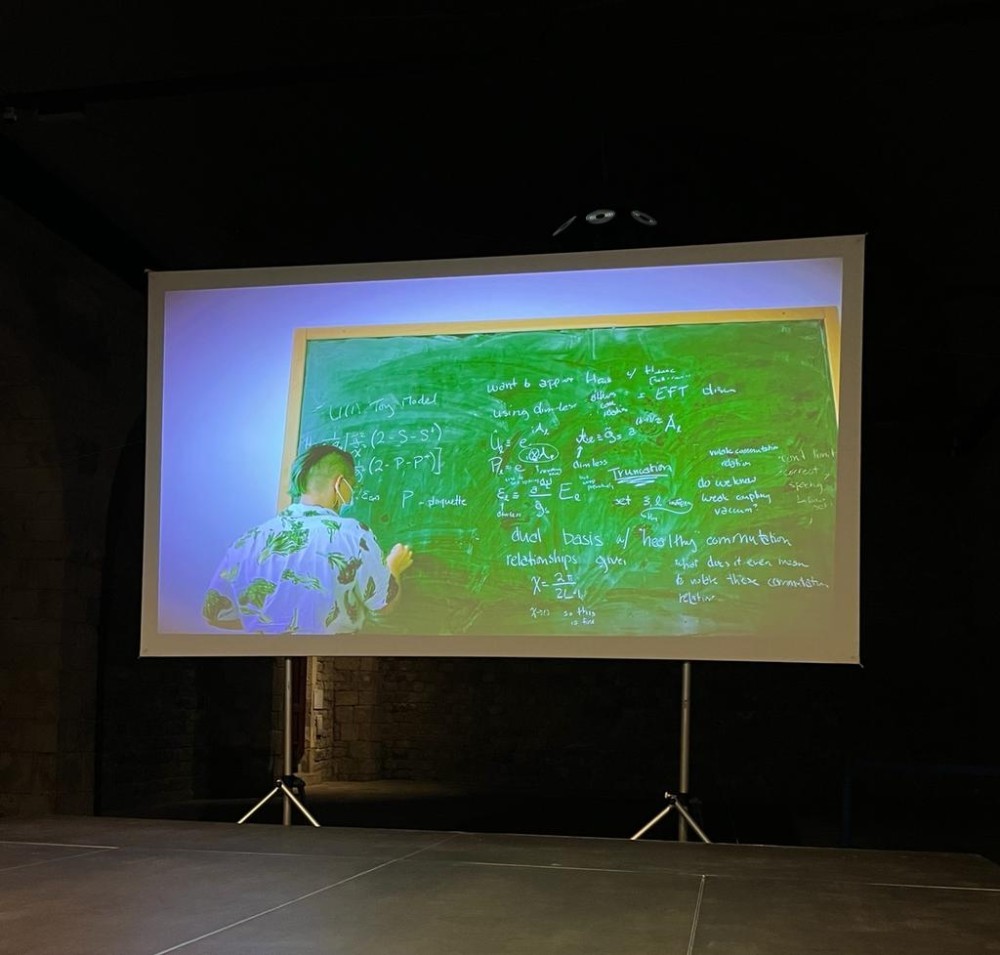 Screening of Black Quantum Futurism's film during the celebration event of the three-year collaboration between Arts at CERN and Barcelona.

What scientific research centres have you visited in Barcelona?

During our stay, we have had a series of meetings and exchanges that have been very beneficial for our research. At the Barcelona Supercomputing Center (BSC), in a conversation with Artur García and his colleagues, we learned about future developments in (quantum) computing. This conversation was complemented by an interesting dialogue with José Ignacio Latorre, director of the Singapore Centre for Quantum Technologies, in which we discovered more about the possible implications of quantum computing technologies for the socio-political fabric of the world.

At the Institute of Photonic Sciences (ICFO), Lydia Sanmartí introduced us to the centre, and we learned more about single-molecule biophotonics, as well as nanoelectronics and quantum nanomechanics, with scientists Lukas Lau and Stefan Forstner, respectively. At the Institute of Cosmos Sciences (ICCUB), we had an inspiring debate on the limits of reality and the liminalities between culture and nature with scientists Xavier Luri, Toni Bertólez and Pablo Bueno.

How have these experiences enrich your project?

Each of the visits and conversations has allowed us to broaden our research and understanding of the points of emphasis in the field of physics. Along the way, we have collected stories and notes that will form a narrative for an extended video project.

Interview by Arts at CERN, Hangar and Barcelona Ciència i Universitats.

Collide is Arts at CERN's international residency programme, in collaboration with the Barcelona City Council and the Institute of Culture of Barcelona (2019-2021).