Tania Candiani starts her research stay at CERN as part of the Guest Artists programme, aiming to interweave possible connections between the narrative of quantum physics and ancestral indigenous knowledge.

Mexican artist Tania Candiani works in various media and practices, engaging with association narratives from rearranging, remixing, and playing with correspondences between technology, knowledge, and thought. In 2020, Candiani received an Honorary Mention of the Collide Award to participate in our Guest Artists programme – a short exploratory stay at the Laboratory to engage with CERN’s research and community. ‘After three years of speculation about the shapes, sounds, perceptions, universes, and dimensions that I would find at CERN, I will be finally going on a short field visit for the first time,’ commented Candiani about her stay.

Candiani aims to start building a visual, sonorous and written archive that will be the basis of two projects, Quantum Fictions and Quantum Prelude. As a point of departure, both have the idea of interweaving possible connections between the narrative of quantum physics and the thoughts and words of ancient indigenous cosmovisions.

In an interview with Arts at CERN, Candiani described where both ways of thinking overlap, ‘In search of answers to fundamental questions about the more-than-human history of the cosmos, particle physics has scrutinized the world at the quantum scale, altering what we know and revealing the extent of our unknowing. [..] At the same time, much Indigenous knowledge has had for hundreds of years an explanation of those fundamental questions, between the real and imaginary, the measurable and immeasurable, the visible and invisible, all simultaneously.’

Her interest in tracing associations and parallels between the two seeks to merge a Western aesthetic canon that privileges vision and metaphysical knowledge and Indigenous oral traditions in which knowledge and history are encoded in the body and ritual. 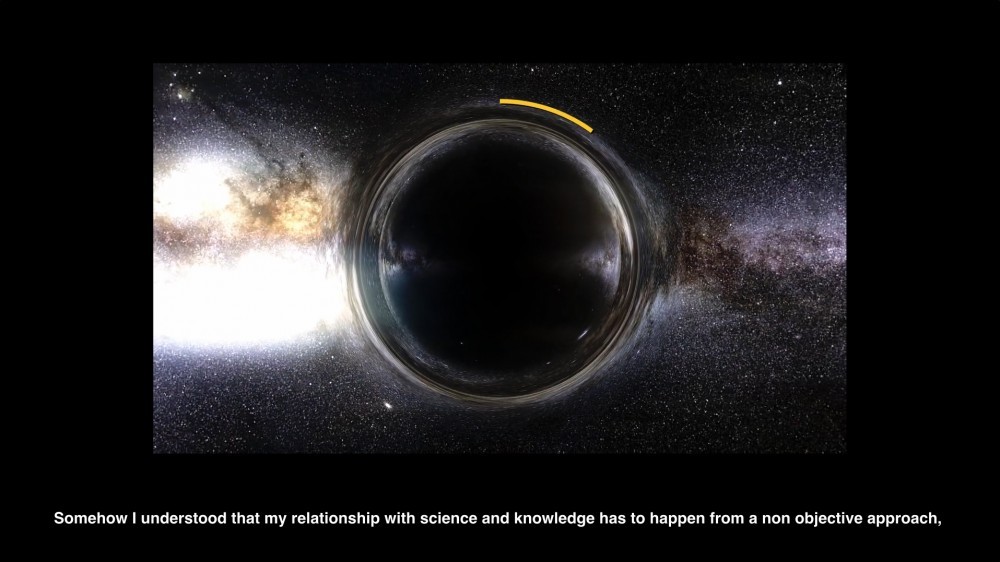 During her days at the Laboratory, the artist will explore and film several detectors at the Large Hadron Collider, including ALICE, CMS and ATLAS, as well as the tunnels of the High-Luminosity Large Hadron Collider (HL-LHC) project. She will access the archives of the Data Centre and explore discarded material and objects from old experiments.

As a core element of the residencies, she will engage in conversations with physicists, engineers and Laboratory staff working across CERN’s broad scientific programme, including antimatter, quantum gravity, and particle detectors. About these exchanges with the scientific community, Candiani expects ‘to experiment with paradigms and systems of translating from the dimension of the invisible or inaudible’. The existence of an expressive matter has deeply symbolic meanings and depth—eloquent, emotional, charged particles. So, I will be looking for having conversations from the perceptual imaginary where the possibility of interpretation can wonder us.

Thanks to the support to Arts at CERN of the Didier and Martine Primat Foundation and its special fund Odonata, Candiani will produce an Art Commission following her research and experience at the Laboratory. This multi-year partnership and grant scheme with the Primat Foundation fosters creative interactions between arts, sciences and nature and includes art commissions to Irish photographer Richard Mosse and German artist Mariele Neudecker.

The sound piece Quantum Prelude proposes a connection between CERN’s Large Hadron Collider and the exhibition space at the Museo Universitario Arte Contemporáneo (MUAC) in Mexico City. The ‘sound choreography’ the artist finds in the movement of subatomic particles will be visualized as a possible musical score that integrates the sound of acoustic instruments and voices. In collaboration with musician Rogelio Sosa and performers from Mexico City, this work will be exhibited at the artist’s upcoming solo exhibition at MUAC in 2023.

Article by Ana Prendes, Communications and Content Producer at Arts at CERN