Yann Marussich was awarded the Collide Geneva Dance Award in 2019. Postponed due to the global pandemic, the Geneva-based performer starts his residency at CERN to investigate the link between immobility and movement, intending to develop a ‘levitation’ device exploring how magnetism can influence his moves in the air.

Yann Marussich is a unique character in the field of performance art as he creates works that have a disturbing, provocative, and authentic impact on the audience. Since his first completely immobile piece in 2001, Bleu Provisoire, Marussich has been developing his work in introspection and the control of immobility while exposing his body to diverse situations and even aggressions. In 2017, he presented 12 minutes et 34 secondes pour battre la brèche, which marked the beginning of his cycle of work around concrete, followed by their pieces Le Festin du béton, El Cubo and Le toucher. During these performances, the artist casts himself in concrete. At the same time, Yann Marussich is also developing L’Homme-Béton, a transversal project including performances, video performances, writing and drawings.

In 2019, Marussich was awarded the Collide Geneva Dance Award for his project D’Air. ‘What does a performer come to CERN to do? To transform himself into a quantum fluid? To disappear into the speed of light? A bit of all of this, no doubt, but I come with all humility. My field of work is my body; the rest is not in my size,’ Marussich commented about his upcoming residency.

The performer is now in the Laboratory to explore CERN’s broad research and engage in conversations with physicists, engineers and staff. He aims to investigate the connections between immobility and movement. Particularly, he is interested in magnetism and its invisible forces and how they can influence his movements in the air. ‘My whole quest is based on the link between immobility and movement: a birth between the invisible and the visible. The immobility is only a movement that has not been seen yet. As I have no skills in quantum physics, I come to research and seek help: I would like to understand magnetism, and especially how these invisible forces could carry me. I don’t have any answers, that’s why I’m here’. 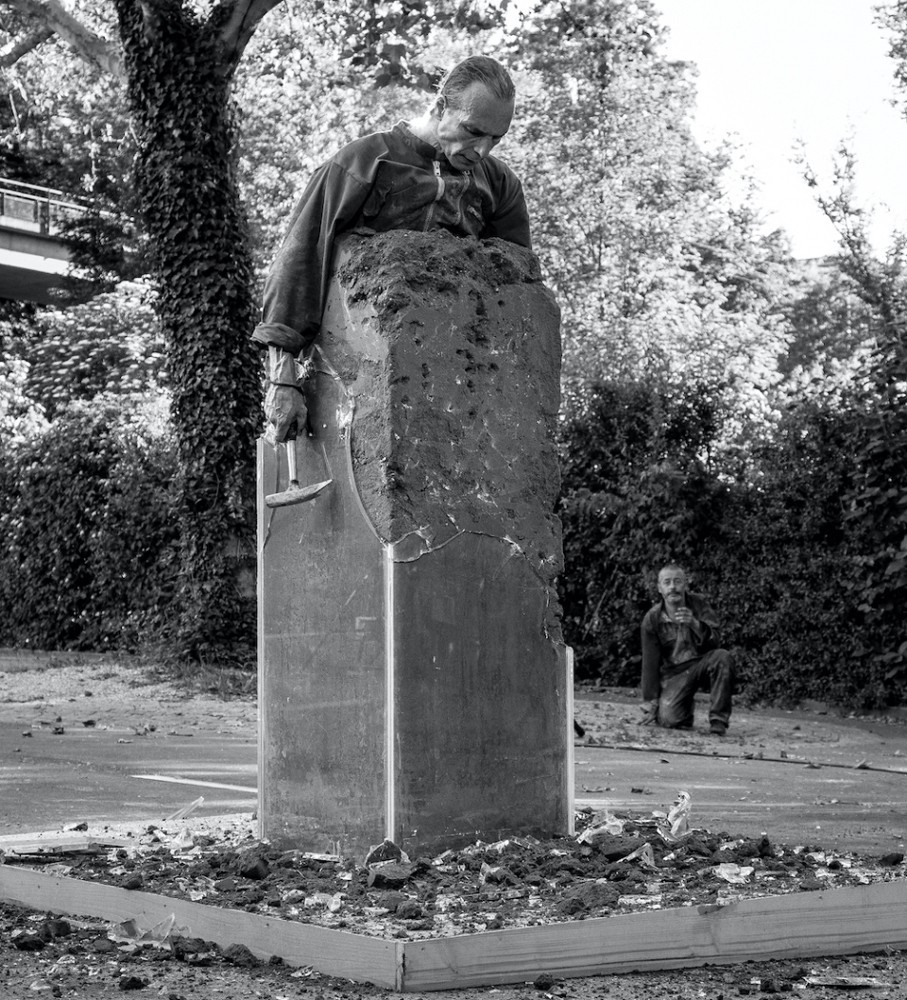 Yann Marussich during one of his performances as part of his work cycle on the theme of concrete.

For 30 years, Yann Marussich has been exploring matter in his performances. After being buried under 600 kg of broken glass and having sunk his body in concrete, Yann Marussich will now immerse himself in the air. Through dialogues with CERN’s community, he will intend to develop a device to give the illusion of levitation during his performances.

Collide Geneva, funded by the City and Canton of Geneva, was a residency award that celebrates Geneva as a consequential meeting point for arts and science throughout history, highlighting its unique role in the founding of CERN back in the 1950s. Geneva-based artists complete a fully-funded residency of up to three months at CERN to further their artistic practice by immersing themselves in the world of particle physics.