Julijonas Urbonas: ‘Nurturing dialogue between science and art complicates what is considered as real’

On the occasion of his Lithuanian Pavilion at the 2021 Venice Architecture Biennale, we spoke to Julijonas Urbonas about the use of scientific vocabulary in his practice, collaborating with experts from other disciplines and his CERN project When Accelerators turn into Sweaters.

‘How will we live together?’. This year’s theme of the Venice Biennale of Architecture formulated by curator Hashim Sarkis is an open question, drawing from the power of the architectural imaginary and highlighting architecture as a form of collective expression. In a crossover between speculative design and architecture, the Lithuanian Space Agency’s pavilion stands out by reacting to this ambitious query with a striking question on its own. ‘When humans are liberated from the constraints of Earth and simply become the building blocks of a new extra-terrestrial structure, what is the role of our earthly cultural and ethical notions?.’ 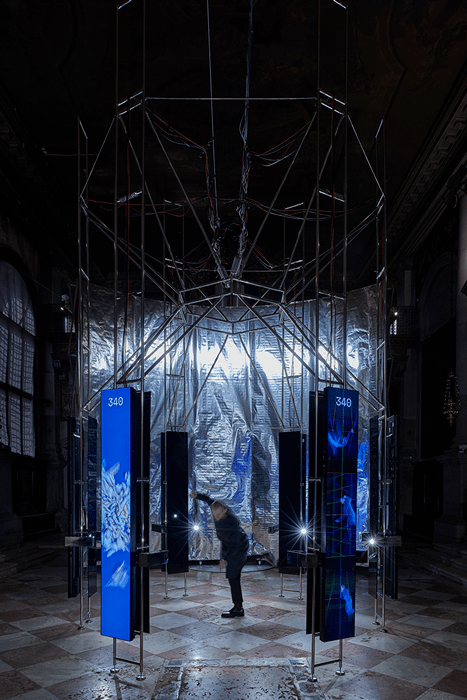 Titled Planet of People, founder of the LSA Julijonas Urbonas, presents an artistic and scientific feasibility study of a hypothetical planet made up of human bodies. The installation is located in the renaissance Santa Maria dei Derelitti’s church and pivots on a 3D scanner that scans visitants to ‘send’ them into space as animated simulations. Through research, case studies, and prototypes, the LSA examines the aesthetic, ethical and political aspects to realise such a project, raising questions from cosmic culture and astrobiology to space colonialism and the policies governing the use of outer space. 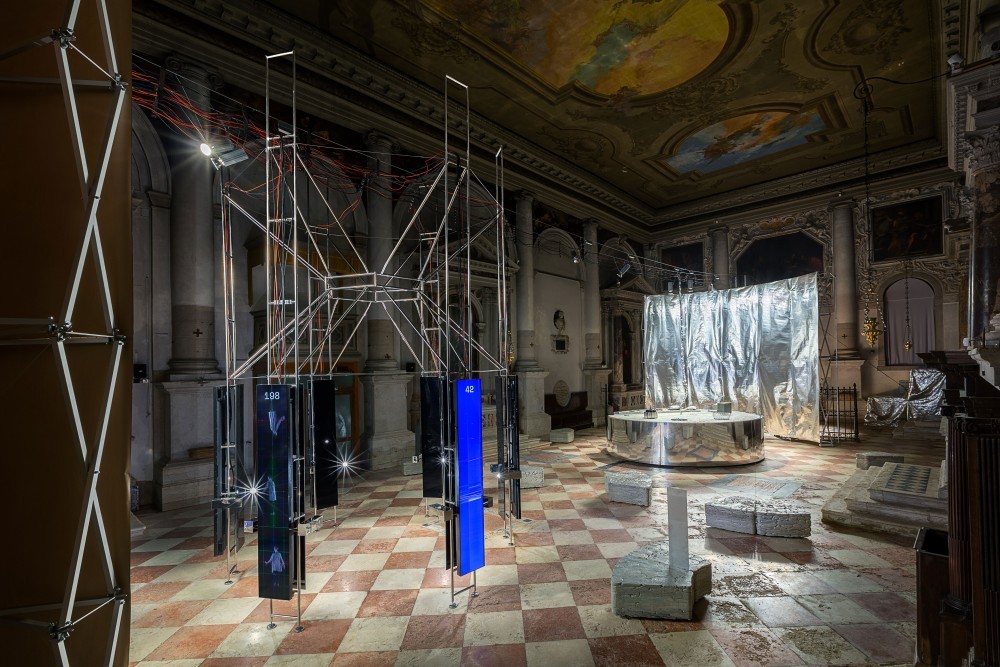 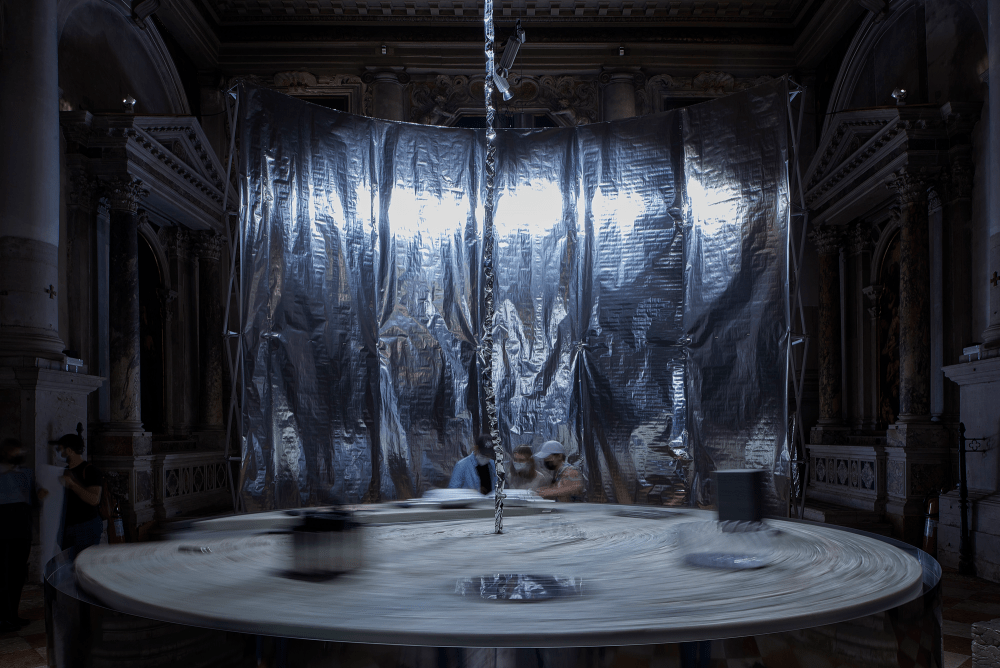 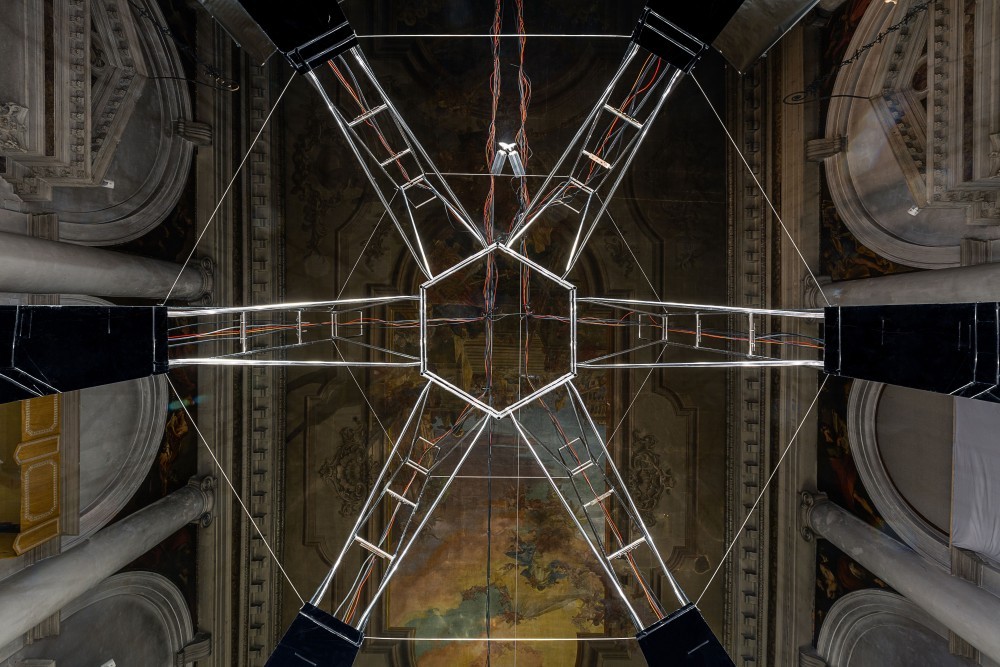 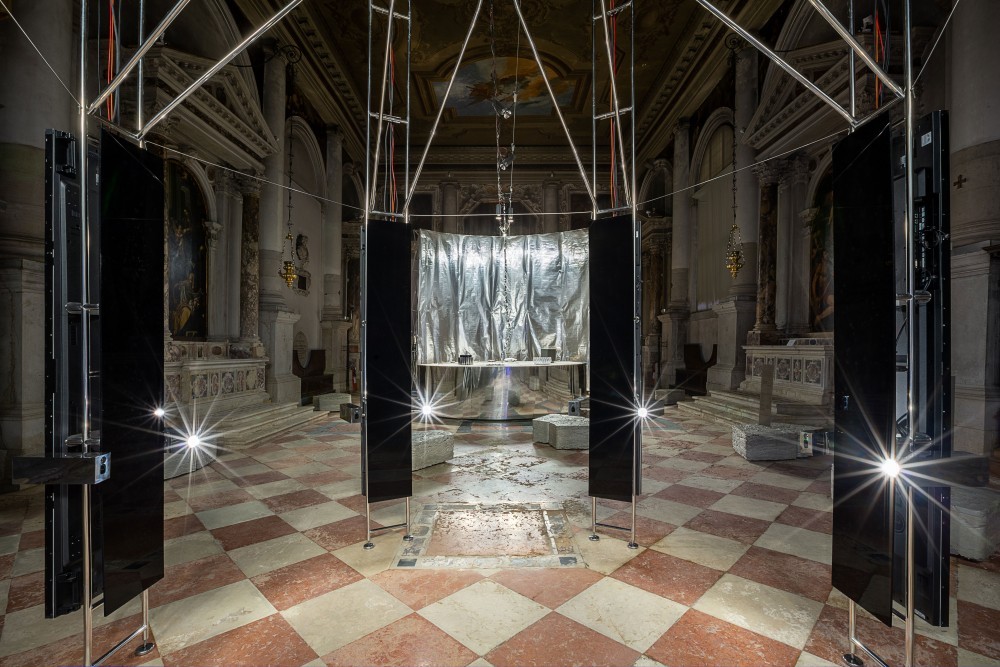 While investigating the feasibility of this artificial planet, Urbonas collaborated with researchers from several fields and countries. As the winner of Accelerate Lithuania, the artist spent one month in residency at CERN in 2016, which helped him develop the skills needed to collaborate with science, engineering, and technology experts. ‘The residency imprinted in me a unique, empathetic approach to scientists, which became quite methodological and has been informing my recent collaborations with all kinds of experts,’ Urbonas told Arts at CERN.

During his residency in the Laboratory, Urbonas became interested in the unique properties and imaginary qualities of superconductors – an essential material for particle accelerators, being the Large Hadron Collider, the largest superconducting system in the world. Particularly, he was engaged in quantum magnetic levitation – a phenomenon that occurs when a superconductor at its critical temperature levitates over a magnetic source, known as the Meissner effect.

The artist was keen to imagine what impact levitation would have on art, design and architecture if this event were possible at room temperature. ‘What if your clothes, for example, were made of this levitating stuff? Maybe such a levitating wearable could bring particle physics into the experiential realm: the micro into the macro?’. These questions led to his most complicated project that came out of his residence, When Accelerators Turn into Sweaters. 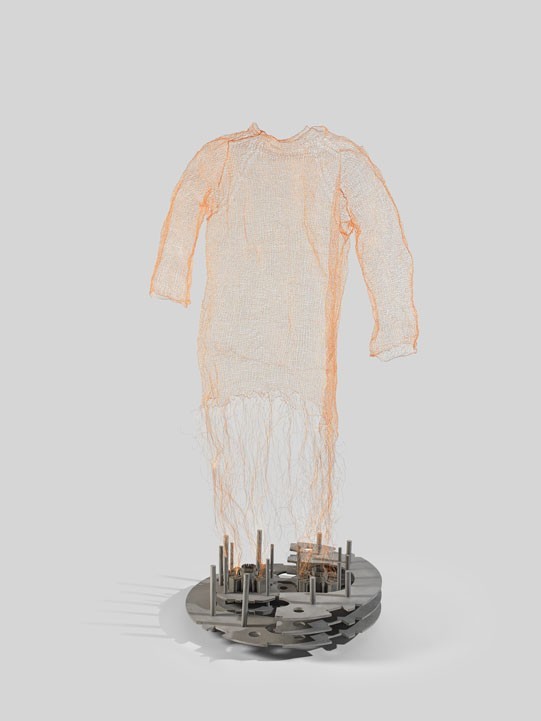 The artist started experimenting with knitting superconductor fibres immersed underwater – non-coated superconductors can ignite under oxygen exposure – and looking into cryogenics to make them levitate. As the project developed, Tim Ingold’s writings on the anthropology of lines opened him up to a new perspective on the project. ‘Physicists, in their explorations of the chain reactions of subatomic particles, aim to discover nothing less than the most fundamental building blocks of the universe itself. However, a world assembled from perfectly fitting, externally bounded blocks could harbour no life. Nothing could move or grow’ (Tim Ingold, The Life of Lines, 2015, p.15). 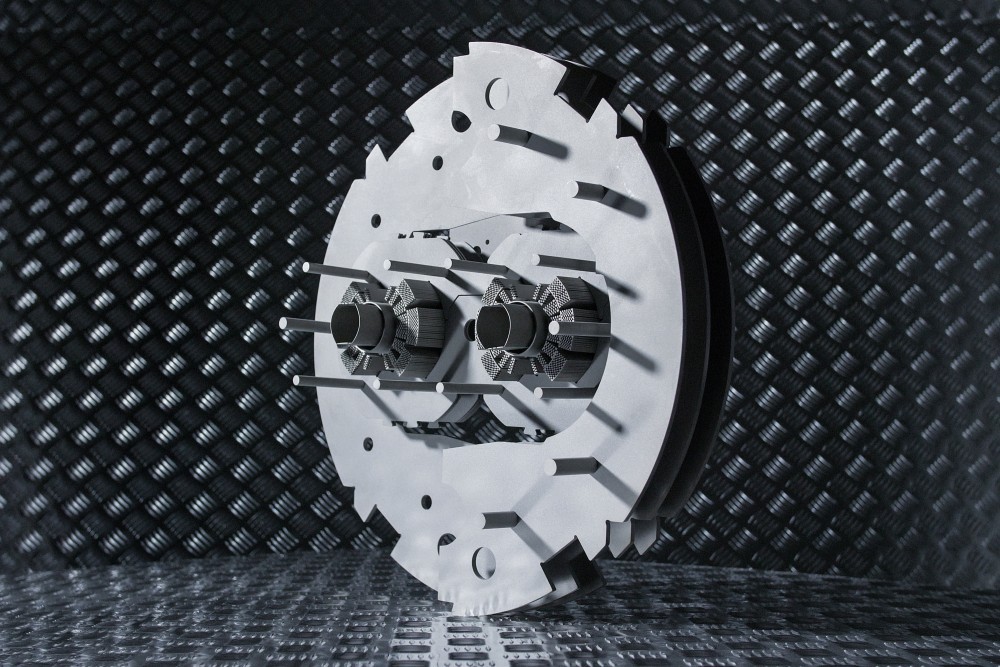 Urbonas started wondering how such a non-pragmatic disruption and poetic abuse of technology could affect scientific language and metaphors, and materialised this insight into a CERN-like heritage object as the ones on view in the Laboratory's collection. He created a full-scale stainless steel replica of a section from the Large Hadron Collider and developed a way to weave these superconducting fibres into textiles. These cables dangle and entangle as a sweater-like knitwork object levitates in response to a magnetic field. ‘What such a staged thought experiment does to the metaphor of the building blocks of the universe?’ the artist poses. 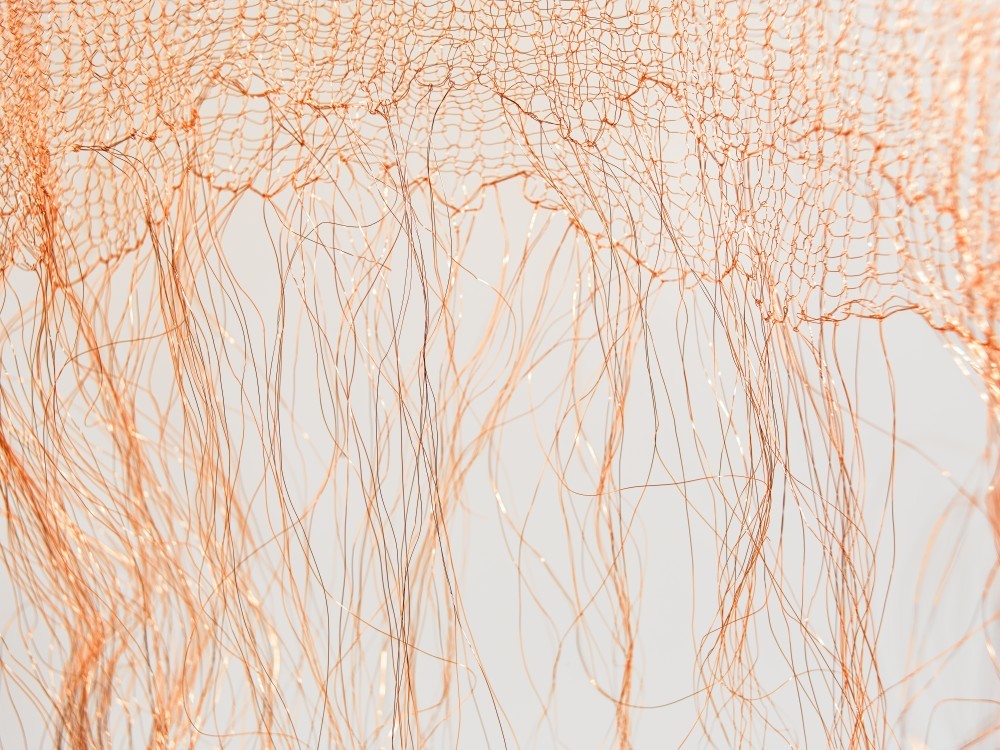 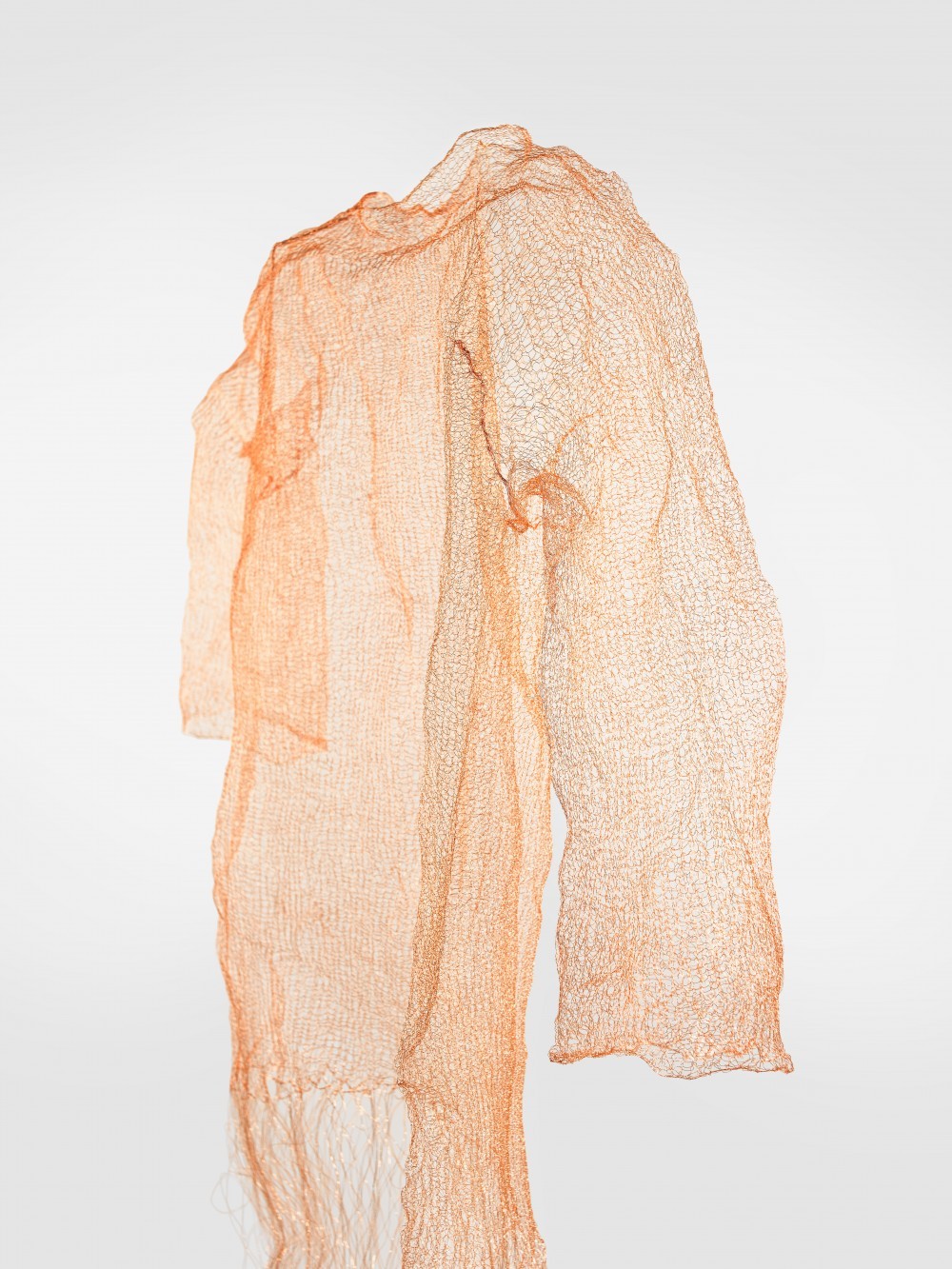 Over the last ten years, Urbonas has been researching gravitational aesthetics – a term coined by the artist to describe a specific type of architecture, design and art. Gravitational aesthetics explores ‘the choreographing power of things, both real and imaginary, and the effects these choreographies have on the sensual, psychological and social domains.’ While those choreographies are extreme, push the limits of imagination, and are often difficult if not impossible to realise, the artist aims for a quasi-real appearance of his projects through the use of scientific vocabulary in his artistic practice. However, the artist is critical of the conventional perception of science, and calls for dialogues between disciplines to dismiss the misconceived epistemological view of scientific knowledge as the ‘truth’.

The artist remarked, ‘We’re becoming increasingly aware of science’s volatile nature that it is driven by the flux of intersubjective, cultural, political, economic and technological forces. [...] Nurturing the dialogue between science and art, I believe, brings those issues into the discursive and experiential realm and complicates what is considered as real and what’s not.’

Planet of People is on display in the Santa Maria dei Derelitti as part of the Venice Architecture Biennale, until 21 November 2021. It is curated by Jan Boelen, commissioned by Julija Reklaitė and organised by Rupert, Centre for Art and Education, and presented by the Lithuanian Council for Culture.