‘These days provoked both a deconstruction and a reformulation of my notions of reality; they were a portal,’ Patricia Domínguez reflected on their time at CERN. As the Chilean and Geneva-based artist Chloé Delarue finished their Simetría residency in Switzerland, we delve into their experience at the Laboratory.

‘The residency meant travelling to the furthest possible place, both in physical and conceptual terms. These days provoked both a deconstruction and a reformulation of my notions of reality; they were a portal,’ Patricia Domínguez reflected on their time at CERN. Chloé Delarue shared the same perception, ‘After all the discussions and experiments, you understand that what we call reality has a different taste. I believe my unconscious understood faster than me by the abyssal dreams I had during this residency’. The Chilean and Geneva-based artist concluded their two-week stay at the Laboratory as part of Simetría – a dual residency between CERN and the European Southern Observatory (ESO) astronomy facilities in Chile: Antofagasta, La Silla and the ALMA observatory.

The Simetria award was created to foster experimentation in the arts in connection with fundamental science and promote exchanges between artists and scientists in Switzerland and Chile. Both countries are home to some of the most extraordinary scientific instruments dedicated to understanding the origins and the evolution of the Universe, from the subatomic scale of particle physics to the cosmic scale of astronomy. The residency invited two artists to both locations to research new expressions in their artistic practices and develop them further into art productions. Simetría is now part of Connect – a new platform launched in 2021 in partnership with Pro Helvetia to promote exchanges between art and science in Switzerland and worldwide. 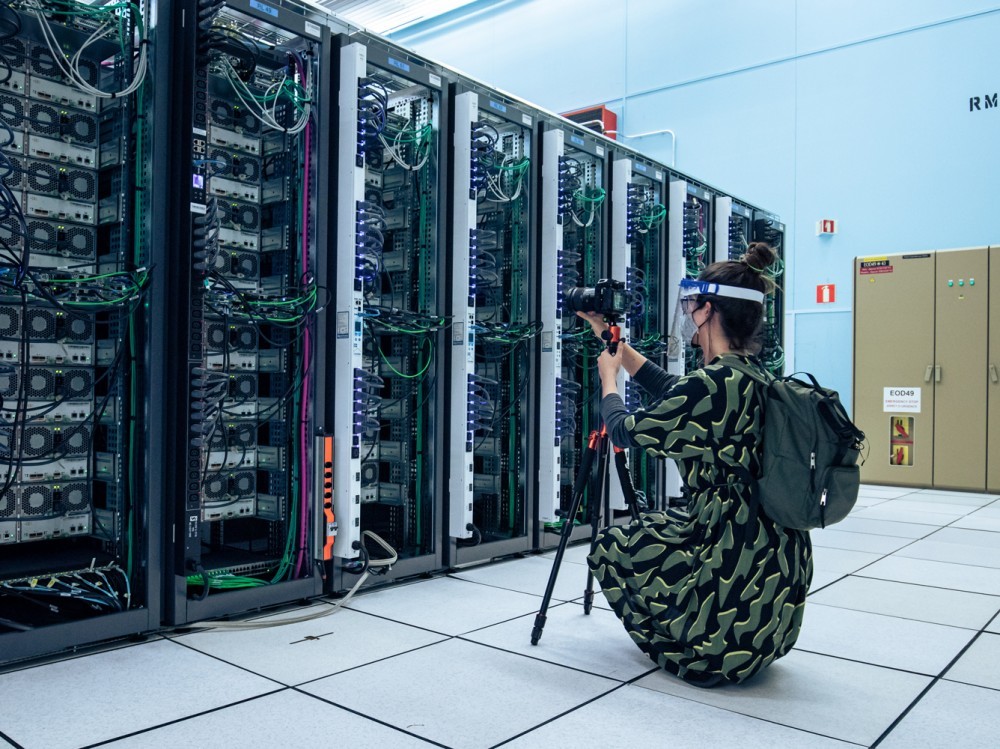 Domínguez and Delarue enjoyed a singular dynamic of an art residency, delving together into CERN’s environment while exchanging their visions and enriching each other’s practices. ‘Together with Chloé, we immersed ourselves in the invisible and infinite world of fundamental particles. The experience entailed expanding my notions of precision and subtlety scientists need to study the particles that make up everything around us,’ Domínguez remarked. The artists examined the Laboratory’s fundamental research, exploring its diverse experimental programme, including visits to the Large Hadron Collider detector’s ATLAS and ALICE, the neutron time-of-flight (n_TOF) facility and the Isotope mass Separator On-Line facility (ISOLDE).

The Laboratory’s rich scientific programme also involves developing novel technologies contributing to high-energy physics and beyond. Guided by physicist Abhishek Sharma, Domínguez and Delarue visited the Silicon Facility, where physicists develop cutting-edge silicon detector technology for the next-generation particle detectors – all in search of new physics phenomena. ‘As you cannot understand everything, the power of the imagination is always reassuring in the face of the tender anxiety of the universe’s complexity,’ Delarue described her feelings towards the immensity of the Laboratory’s scientific mission. ‘It’s like increasing your senses, a feeling of vertigo difficult to define,’ she added. 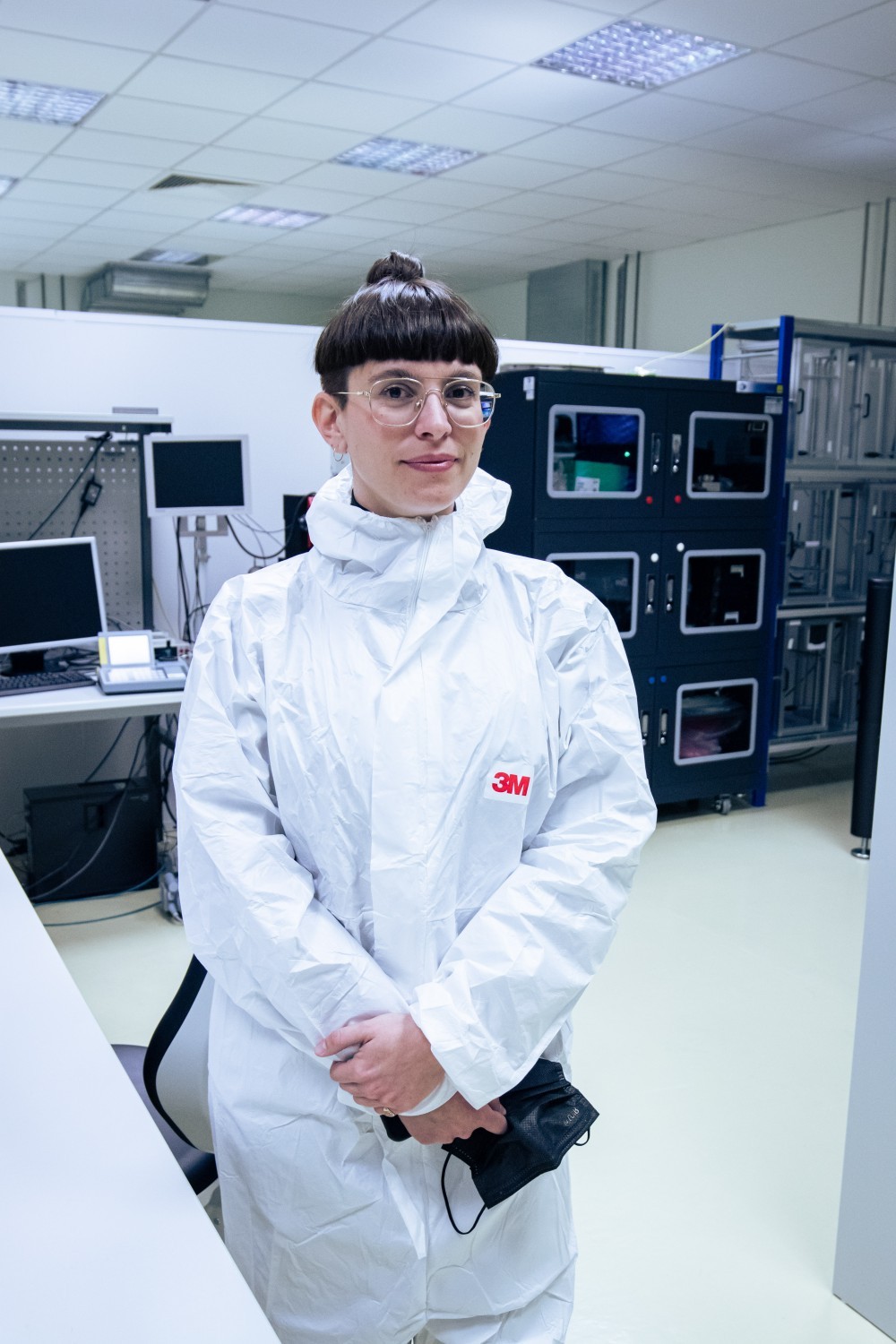 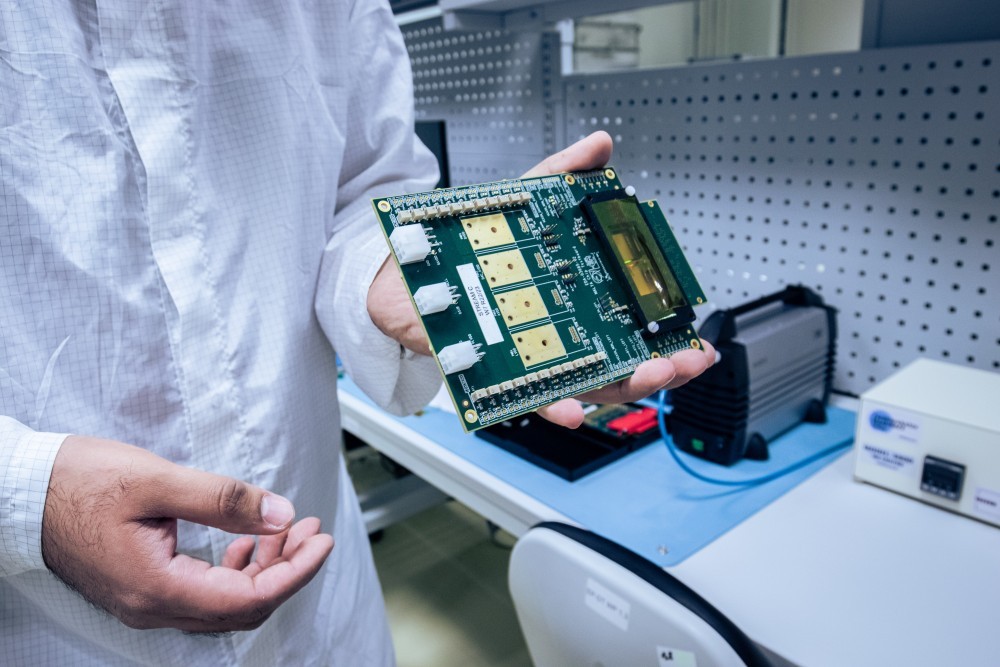 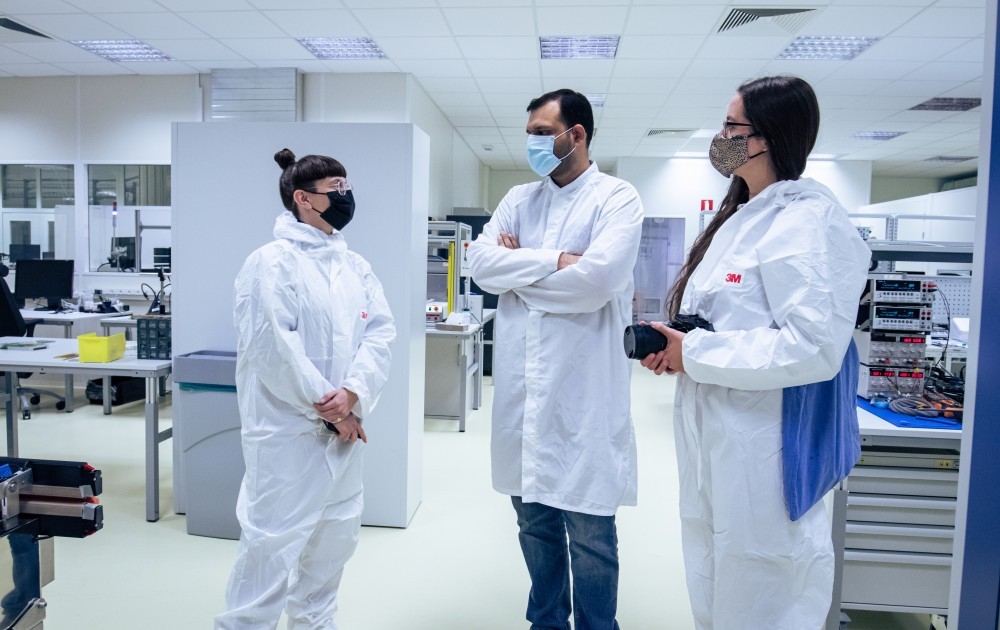 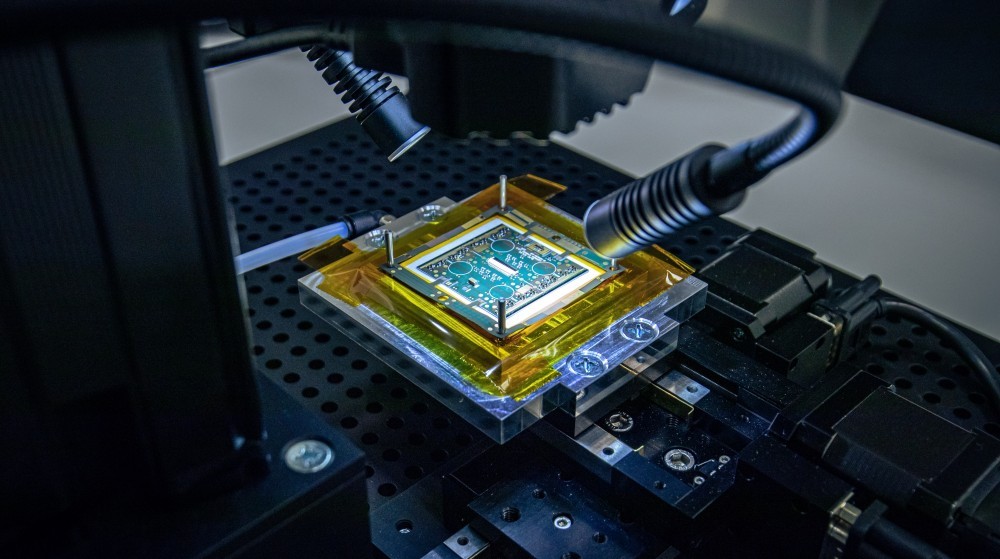 At CERN’s Neutrino Platform, Domínguez started filming one of her residency projects. For the shoot, the artist chose one of the ProtoDUNE detectors – a gold-coloured detector in the shape of a gigantic cube dedicated to unlocking the mysteries of neutrinos. In Domínguez’s film, a cyborg woman will be guided by a bird-robot, travelling through CERN’s ‘quantum worlds’, ancestral spaces in the ancient petroglyphs in the Atacama Desert, and the world’s most precise observatories at the ESO Astronomy facilities in Chile. Yet, in development, the film explores the connections between the quantum world and the spiritual in a request to decode how we understand reality. 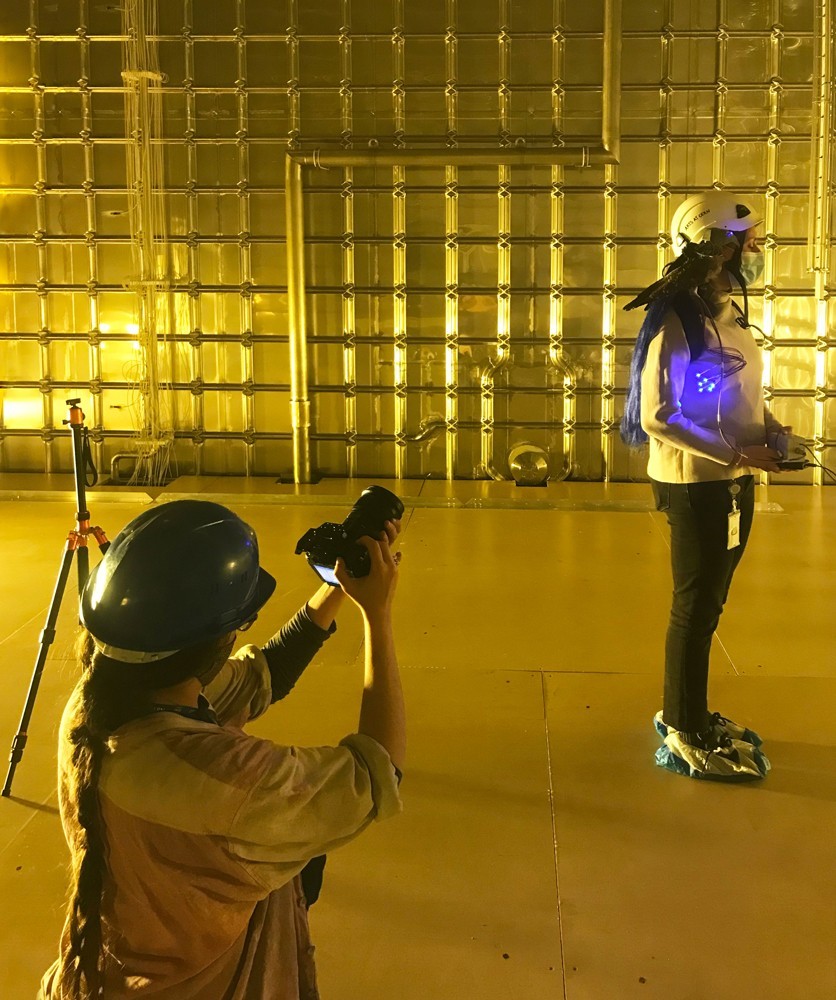 Patricia Domínguez filming at one of the ProtoDUNE detectors with Head of Arts at CERN Mónica Bello. Photo by Iliana Tatsi © CERN

Exploring the creativity of fundamental physics

The artists met several physicists, engaging in conversations exploring their work and the speculative notions surrounding the world of fundamental physics. In conversation with theoretical physicist Wolfgang Lerche, the artists explored black holes and their possibilities of storing information. Their immersion in the scientific community challenged their preconceptions of scientific work. ‘I was deeply impressed by the level of abstraction, imagination, speculation and open thinking of scientists while they work with the largest, most precise and advanced machines that exist today,’ Dominguez commented about these encounters. 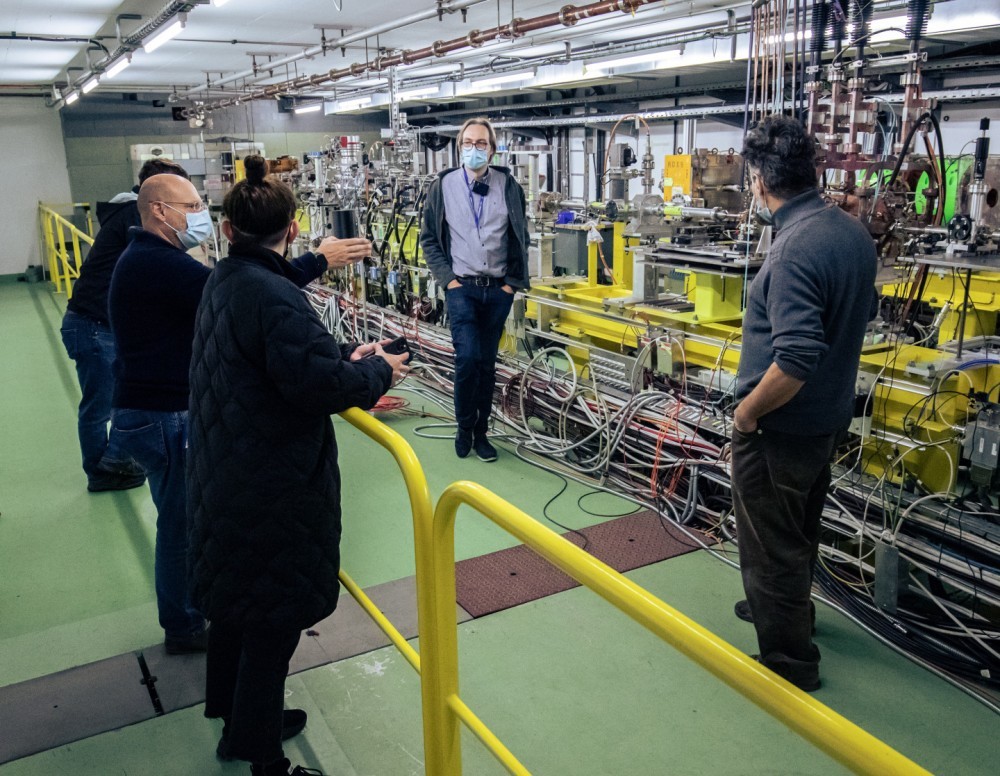 Chloé Delarue and Patricia Domínguez with physicists at the CLIC Experiment. Photo by Franciska-Leonora Toeroek © CERN 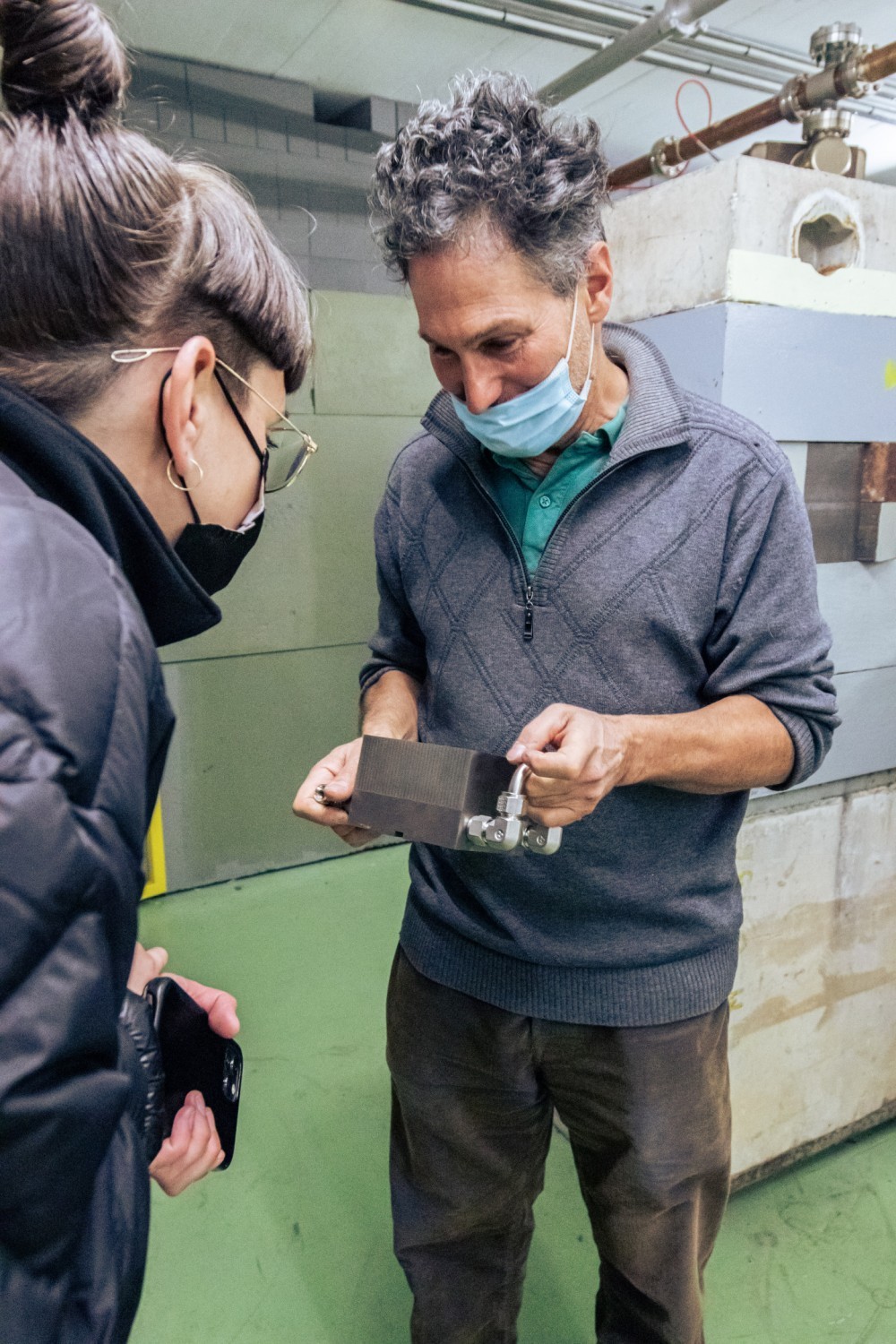 Chloé Delarue with physicists at the CLIC Experiment. Photo by Franciska-Leonora Toeroek © CERN 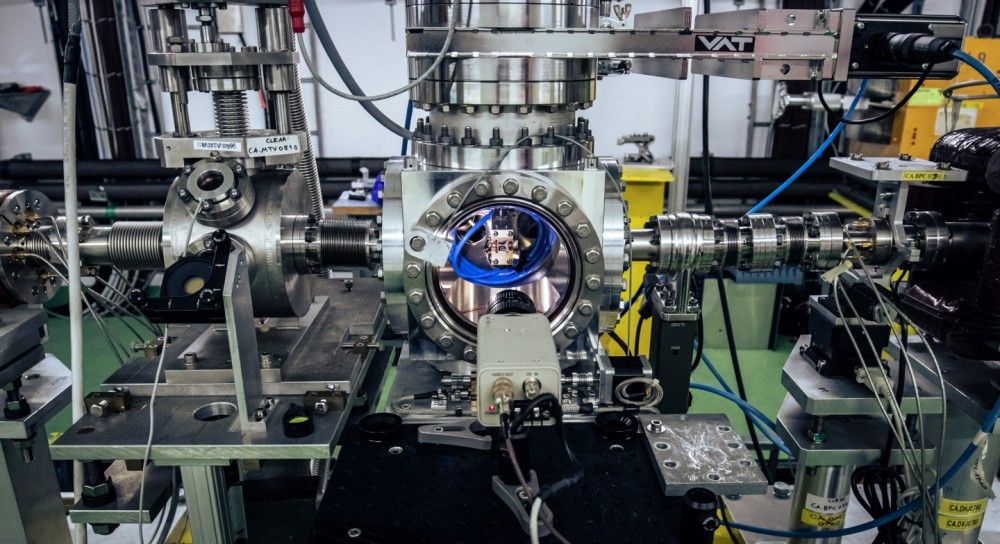 Close-up of the CLIC Experiment. Photo by Franciska-Leonora Toeroek © CERN 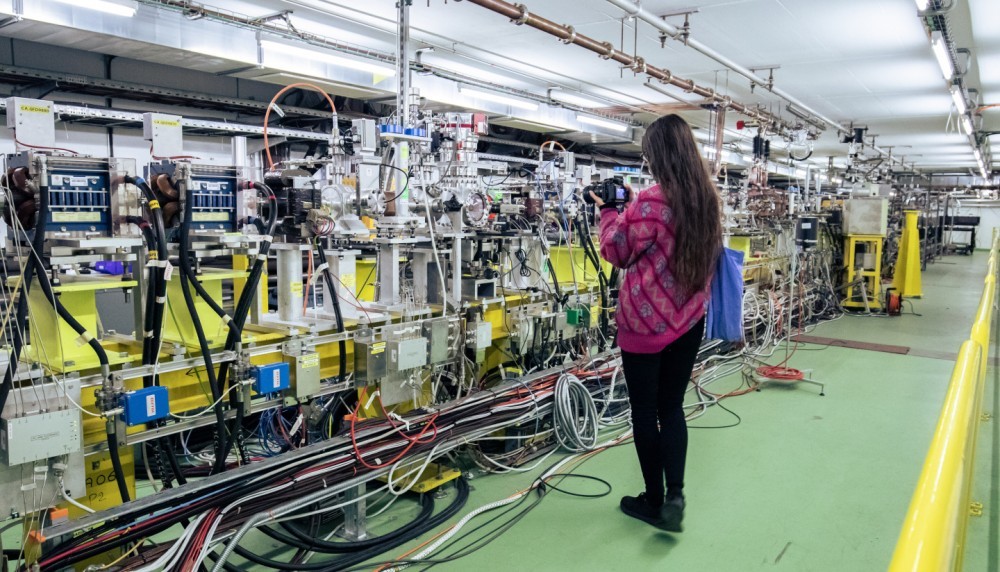 Patricia Domínguez filming at the CLIC Experiment. Photo by Franciska-Leonora Toeroek © CERN
The residency will continue next year in Chile

In 2022, subject to travel restrictions, both artists will travel to the Atacama Desert region of Chile, home to the European Southern Observatory’s world-class observing facilities for astronomy: La Silla, Paranal, and the ALMA Observatory. The artists will explore some of the world’s most advanced observational facilities that have led to many astronomical breakthroughs, including the two Nobel prize-winning discoveries of a supermassive black hole at the centre of our galaxy and the accelerating expansion of the Universe. Moreover, they will engage with the local scientific and cultural communities to continue exploring their artistic practices.

Simetría was a residency programme organised by Arts at CERN and Corporación Chilena de Video. Arts at CERN is supported by Pro Helvetia in the context of Pro Helvetia South America. Simetría is now part of Connect.

Article by Ana Prendes, Communications Producer at Arts at CERN